As promised last Thursday at our divine audience diversity event – thank you to all involved – please find below the petition (now open) to which TNN is adding its support in response to Senator Brandis’ announcement earlier this week. Our TNV colleagues have been furiously working with their stakeholders to prepare the following announcement. 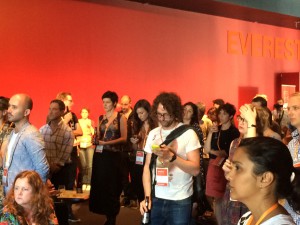 Theatre Network NSW recognises and supports the incredible value of the small to medium sector to the NSW theatre ecology and are kickstarting our own responses by sharing this TNV announcement and the petition. Please share amongst your own networks if you haven’t already.

Further to our Friday night email and Saturday’s social media we’d also like to highlight Neil Armfield’s response on Lateline last Thursday (Neil Armfield on Lateline). For those of you who haven’t had the chance to view it, here it is and we look forward to hearing from our own NSW voices in the sector. Here’s a little of what Neil had to say and an element of the change’s that TNN feels is of major concern:

“But what worries me is that this $100 million therefore comes from that other half, which is where the small-to-medium companies need for their survival. And these are companies which don’t have – depending on where they are in that food chain, they have less and less ability to – or profile to raise sponsorship. They have less time to develop relationships with government there. They’re really out there at the barricades in a sense developing the work. This is the sort of the seeding place. These are the seedbeds of our culture. These are the small companies. It’s like Back to Back in Geelong, it’s Yirra Yaakin Noongar Theatre in WA, it’s Griffin in Sydney, it’s – it’s – they’re really the most vulnerable and some of them of course have been majorly successful. Back to Back is possibly Australia’s greatest cultural export”.

As you will know by now, Federal Arts Minister George Brandis has taken $104.8 million off the Australia Council, over four years, to start a National Centre for Excellence run by his own office. This will decimate the Australia Council’s discretionary budget, and has threatened the new programs and initiatives that started only this year.

WE NEED YOUR HELP!

1. Please write to your local federal MP to tell them how poor this decision is, and how it threatens the fundamental democratic process of arts funding. It doesn’t matter what political party they are from, they represent you and your interests.

>       Put in your postcode, and it will give you the contact details for your local MP.

2. Get busy on social media: #FreeTheArts

3. Sign the petition: The petition to add your name to is now live: http://www.australianunions.org.au/australians_for_artistic_freedom

We are vehemently opposed to Minister Brandis’ plan to take millions of dollars from the Australia Council into the control of his own office.  We know that the Australia Council’s processes are completely democratic, rigorous and efficient. The agency’s fundamental platform – of arms length, peer assessed funding – would be undermined with this plan. Minister Brandis has himself expressed a desire for greater freedom of expression, but his own actions belie that principle. We agree with the outrage many of our colleagues have expressed in the media across the country in the past 48 hours, that the basis of democratic, accountable arts funding is at risk. We urge the government to reverse this plan. Do we really want a country that has tightly controlled, government managed arts activity?

Below is some of the media coverage from the past 48 hours. Many thanks to our excellent media colleagues who have taken this issue on in a big way.

Now is the time to act! Please!

$104.8 million over four years has been ripped out of the Australia Council’s budget to create a new slush fund, apparently to be decided at the discretion of the Arts Minister of the day.

The funding cuts total $29 million in the coming year, a cut of 16 per cent for the Australia Council on 2014’s appropriation.

‘The National Centre for Excellence in the Arts will allow for a truly national approach to arts funding and will deliver on a number of Government priorities including national access to high quality arts and cultural experiences,’ Minister Brandis wrote in a media release.

The budget also removes $5.2 million in funding from the Australia Council, and gives it to Creative Partnerships Australia ‘to foster private sector support for the arts’.

Ben Eltham for The Drum

(IN RESPONSE TO MINISTER BRANDIS: Arts funding has until now been limited almost exclusively to projects favoured by the Australia Council. The National Programme for Excellence in the Arts will make funding available to a wider range of arts companies and arts practitioners, while at the same time respecting the preferences and tastes of Australia’s audiences. )

Ben writes: It’s not even true that arts funding has been “limited almost exclusively” to the things that the Australia Council likes. The Federal Government spends $100 million a year on screen culture through Screen Australia. It funds two national art galleries, two museums, a national library, a war memorial, a film and sound archive, and a media school. Together, those bodies get more funding than the Australia Council itself.

Mr Dreyfus [Shadow Minister for the Arts] branded the changes as “distressing” and said they had come without warning.

In a statement released on Wednesday, the Australia Council said it would give “careful consideration” to its priorities as a result of the measures announced in the budget.

Mr Myer’s carefully worded statement, according to Mr Dreyfus, was “code for major disruption. They of course can’t publicly criticise their own minister, you can expect a degree of diplomacy in their public statements,” Mr Dreyfus said of the Australia Council.

“What we can see here is a grab here for the Australia Council budget to be administered on a personal whim, without any explanation, or any peer review.”

The Australia Council will also swallow $7.2 million in efficiency savings over four years to 2018-19. These combined cuts represent an annual funding reduction of around 13 per cent for the nation’s principal arts and funding body, which has an annual budget of $230 million.

Funding for Screen Australia, which supports new Australian films, will be cut by $3.6 million over the same period.

VAN BADHAM IN THE GUARDIAN: After the budget: shh! Australia’s era of artistic silencing begins

Brandis has made no pretence that these changes are about anything other than government resentment of the council’s independence, whose current appointments, led by chair Rupert Myer, predate the Coalition’s election to government. “Arts funding has until now been limited almost exclusively to projects favoured by the Australia Council,” was Brandis’ statement on Tuesday.

Yes, George, it certainly has. But this is what’s desirable.

Statement By The Arts Industry – To Be Published On: AustraliansforArtisticFreedom.org

We the undersigned are shocked by Abbott Government proposals in the 2015–16 Budget to make cuts of massive size to the Australia Council for the Arts and other organisations, and to compromise the political independence of current arts funding arrangements.

We reject outright Federal Arts Minister George Brandis’ proposed redirection of $104.8 million over the next four years from the Australia Council for the Arts, to be dispersed at Ministry discretion into a  “National Centre for Excellence in the Arts”.

We oppose this redirection as contrary to the informing principle of independent arts funding as a guarantee on democratic freedom of expression. The government’s budget proposal contradicts the current Minister’s own prior statement – that to provoke debate, “that’s why we have an arms-length and peer-reviewed structure for the allocation of the funding”.

Australia does not need a second national arts funding organisation: over its 42-year history, through a rigorous peer-review process, the Australia Council has realised a mission to ‘invest in artistic excellence’ and make art ‘accessible to all Australians’ and already cultivates a national engagement for audiences and creators.

We oppose also the proposed funding cuts of $3.7 million from Screen Australia, almost $4 million from galleries and museums, $5.2 million from the Australia Council for Creative Partnerships Australia, and $7.3 million in ‘efficiency dividends’ from the Australia Council. The cuts will compromise programmes of quality, equity and diversity within the arts sector, and destabilise the viability of encouraging the development of future arts leaders. Threats posed to the small-to-medium organisations and independent artists who are exposed to a reduced funding pool are an unconscionable threat to building diversity and encouraging innovation in the sector.

The many small-to-medium galleries, libraries, theatre groups, performers and publications now exposed to funding cuts are the primary cultivators of Australian culture, as they foster the early work of those artists we now celebrate. Their diversity in structure and location allows millions of diverse individuals to imagine, collaborate and participate in culture-making. Broad-based civic participation in culture is a necessary resource for a cohesive democracy.

In 2011, the arts sector directly employed 531,000 people, and indirectly created another 3.7 million jobs. In 2008–9, the arts contributed $86 billion (7%) to the Australian GDP. Artists are workers and taxpayers, and a vital part of the economy. Jobs and economic opportunity should not be lost for this number of Australian workers, nor should the cultural, social and educational opportunities of citizens face threat.

We call on the Federal Government and Minister for the Arts George Brandis to reverse all proposed cuts to the arts sector, and to cease political interference in the works of creative Australia.

The undersigned generation of artists, writers, publishers, editors, theatre makers, actors, dancers and thinkers from across Australia ask that government policy affirms that artistic freedom and artistic opportunity are principles enshrined within our democracy.