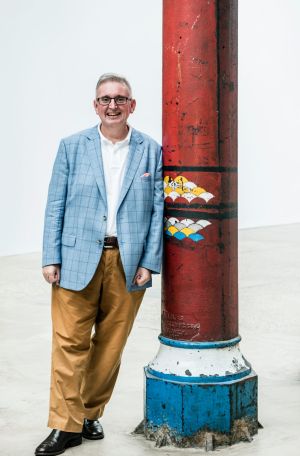 Source: Don Harwin’s arts start has been a relative breeze

… “It is a very exciting time to be the Arts Minister,” he says repeatedly, echoing Malcolm’s Turnbull former catchcry.

Harwin is in the happy position of being a man with money to spend and no shortage of takers. The government promised $600 million in cultural infrastructure funding before the 2015 election and still has about $250 million in the kitty (after allocating $202 million to the Sydney Opera House and $139 million to the Walsh Bay precinct).

He says he will make an announcement about funding before the June budget, but cites Western Sydney and regional NSW as “high priorities”.

“There are a few areas where we need to do better and I think there has been, frankly, under-investment in our cultural infrastructure.”

He backs the government’s controversial plan to move the Powerhouse Museum to Parramatta – despite reports that the relocation could cost up to $2 billion.

“We are absolutely committed to having an iconic cultural institution in western Sydney and the one that makes sense is moving the Powerhouse,” he says. “It’s a collection that appeals to many audiences and it should be at the heart of the city, in Parramatta.”

But he’s keen to talk about his new arts role and so we do.

“The arts inspire us to do great things,” he says. “To listen to a beautiful piece of music or to look at a magnificent painting or to read a great work of literature just uplifts you.”

He nominates literature – particularly, historical non-fiction – as his favourite art form and notes that he has written chapters for several titles, including books on social justice and state elections. He also likes opera and regularly buys Australian Ballet subscriptions for himself and mother Evelyn, who took dancing lessons when she was young.

His Spotify playlist is a love ballad to 1980s and 1990s pop music, including Pet Shop Boys, Elton John and Freddie Mercury (his favourite Queen song is Radio Ga Ga).

He’s spent much of his first month as a minister trouping about Sydney’s arts institutions to find out where funds are needed most. Among those in the queue is the Art Gallery of NSW, which wants some $450 million to build its Sydney Modern extension.

“There’s no doubt they have got a strong case for consideration,” he says. “They’re in the mix, as are many other people. I have got many people knocking on my door right now.”

On Friday night, he revisited the gallery to open its Andy Warhol exhibition and was welcomed like an old friend. Board of trustees president David Gonski, who has seen several arts ministers in his time, told the crowd that “this one loves the arts”.

Harwin’s own gushing speech about the arts went down well with attendees, particularly when spruiking this Saturday’s Gay and Lesbian Mardi Gras. “Happy Mardi Gras to all of those present who are looking forward to a big week, including me,” he said.

But he tells me that his ideal Friday night is staying at home in Vincentia, on the South Coast, and walking by Jervis Bay in the evening, before watching a film. “Politics is a pretty hectic life, so a good Friday night when you haven’t got something on is to just do nothing,” he says.

“But there won’t be too many of those for the next little while.”